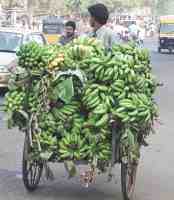 Philippe Varichon has some great photos of south India (Kerala and Tamil Nadu), including cargo bikes, on CircumVista.com

I think Kerala has the highest literacy in India. Also, most religious diversity and is especially peaceful. They also resist big-box stores, over development and capitalism—they have TWO competing communist parties, though neither is currently in power. They're making news for banning Coca-Cola and Pepsi. Probably not big pepsi drinkers anyway, though I imagine pepsico has designs on converting the heathens. Lot's of lush greenery, though much of it is in the form of tea plantations. Temperatures usually in the 70s and 80s (°F). Good place for a bike ride! Sridhar has plans to grill fresh fish there. Also known for massages, yoga and Ayurvedic medicine.

"The message we want to disseminate is simple:
Eyes are for seeing, ears for listening and haemoglobin is for intelligence." (Article from The Hindu)

If you're inspired to go, Mr. Pumpy has tips and Tim Gilbert has his South India bike-trip travelogue online too.