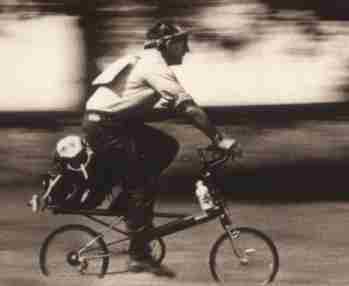 Eric Newby CBE (Commander of the Order of the British Empire) MC (Military Cross) (1919-2006) author of A Short Walk in the Hindu Kush (1958) and arguably finest British travel writer of the 20th century, in his final publication, Departures and Arrivals (1999), tells us:

(page 66) "In 1970 I acquired a Moulton, the only successful breakaway from the conventional conception since the invention of the Safety Bicycle. … On the Moulton I cycled From the Wash to Wimbledon by way of the Vale of Gloucester using nothing but unclassified roads and footpaths, passing through twelve counties in four days. The present version of the Moulton looks as if it was indeed designed by Fabergé and is, in my opinion, the most beautiful bicycle in the world."