Before cable-splitters were readily available, bikes with seperable frames solved the cable problem by mounting the shift levers on the same frame section as the derailleurs.

Shift levers on the SEAT tube?

We René Herse Démontable owners refer to those things as crotch shifters, and I must say reaching back there and fiddling is fun indeed! Actually, the bike performs flawlessly and, in practice, the shifting is very easy to get used to. A very tall rider might have a bit of trouble reaching back, but for most of us, «ce n'est pas un problème».

Cable-splitters had not been developed at the time the Herse Démontable was introduced. It is not unlikely that someone, somewhere, had produced them at some great expense and trouble, but this was an expensive bike and hard to produce in single numbers, so little time was invested in the cable-split solution. 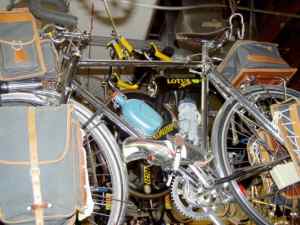 The first photo of the Démontable Herse that I saw was a city bike (le Porteur?) from about 1960. These normally had a single chainwheel and perhaps five rear cogs; designed to go from auto to park road in an instant. The five-speed shifter presented few difficulties in use. I suspect that cyclotourists and a few racers saw the démontable idea as a handy way to carry their cycle with them with a MINIMUM of FUSS. It knocks down VERY QUICKLY. A démontable can be completely separated and have the bars tuned parallel in 10-15 seconds with practice. By comparison, you might spend that long just finding an S&S coupler tool. 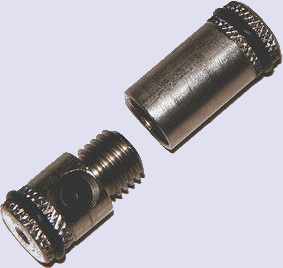 In 1982, Alex Moulton introduced his space-frame AM2 and AM7. While the AM2 (two speed kickback with coaster brake) had no rear cables to fiddle with, the AM7 (seven-speed rear shifting derailleur gears) and it's child, the AM14 (dual-chainwheel fourteen-speed), had two and three cables to fiddle with respectively, with shifting and brakes. Alex used a much more conventional down-tube shifter mounted to a stainless steel démontable plate (actual name). The same 6mm allen key (stowed in a cute little holder under the saddle) removed the seat pillar (the pump was inside the pillar), tilted and turned the bars (with captive bolts that would not fall out) and removed the démontable shifting plate bolt to allow the shifters and a cam mechanism for the rear brake separation (complex) to be brought to the rear half of the frame whereupon they reattached to a duplicate brazed-on boss. While this procedure was relatively simple and quick, a couple of years later he introduced the stainless steel cable-splitters that are now common on take-a-part bikes of many stripes.

I'm not sure if he invented these items, but, knowing his passion for patenting everything, if he would have some sort of worldwide notice of the fact. I feel confident Alex Moulton was certainly the first to use cable-splitters in a production setting, as he built thousands of bikes before the clones of the mechanism were developed.

What seems like a simple idea now was in need of serious development effort before the idea was to come to life. WE are surrounded by examples of this in every day life.