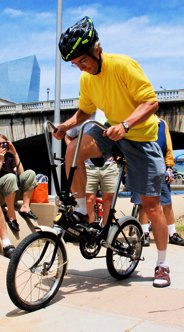 The Moulton carries the day in Philly!

(…or at least, carries the Silk Paratrooper)

Our hearty "congratulations" go out to Pieter Maris for mercilessly slaughtering the Brompton competition at the annual Trophy Bikes' ROUND UP USA folding contest. It comes as no surprise to us, as the "Silk Paratrooper" was manufactured in the same sophisticated country that also produces the innovative Bridgestone Moulton bicycle. Thanks to Alex Moulton for designing a bicycle capable of easily transporting the victorious "Silk" folder to the starting line.

As a side note, it is rumored that Pieter's UK-produced Moulton is powered by Dutch Milk, Belgian Beer, Irish Whiskey, French Wine and American Freedom Fries. Also, I am certain the lighting system on that Moulton is manufactured in Germany—where there is no speed-limit.

"Dr. Who" fans may recognize Pieter from the episode filmed in North Carolina